Unveiling of the Gnome statue Spui

This afternoon a gnome has gained a foothold. In the middle of the Magical centre of Amsterdam, on the Spui, right behind the statue of the Lieverdje.

This Gnome statue represents a revival of the Gnome movement that has never been disbanded. Unlike the Provo movement, which disbanded in 1967, they simply went underground for 50 years; Roel van Duijn, Coen Tasman and Simen de Jong are still present. Although they were unable to attend the unveiling, they are part of the initiative.

A psychogeographic map of the city in the shape of an apple has graced the pavement of the Spui for several decades, with the Lieverdje as a totem pole for the Provo movement. And has now been supplemented with a new statue of the gnome.

In the 1970s, the Gnome Movement focused on issues such as consumerism, housing shortages, nature and the environment and thus formed the first ‘green’ party. The gnomes wanted a car-free green city. They taught us to deal with urban space in a different way. Their goal was a lifestyle that matched that of the gnomes: in harmony with nature. We take action to bring the Unfinished Past of The Gnome Movement to the Present Future Time: Gnomes of Today.

In the near future, according to the Environmental Vision Amsterdam 2050, there will be no more room for (so-called wasted) greenery. It is very important that the Gnomes come out again to think about the course of the city and to help find a good balance between upcoming buildings and valuable greenery.

What kind of city do we want to be?

In any case, the Gnomes are committed to the reputation of Amsterdam and do not greenwash themselves in innocence, but improve the quality of life in the city with their green fingers.

The Gnomes of today let the ideas of the (Culture) Gnomes live on and spread again their magical ideas. 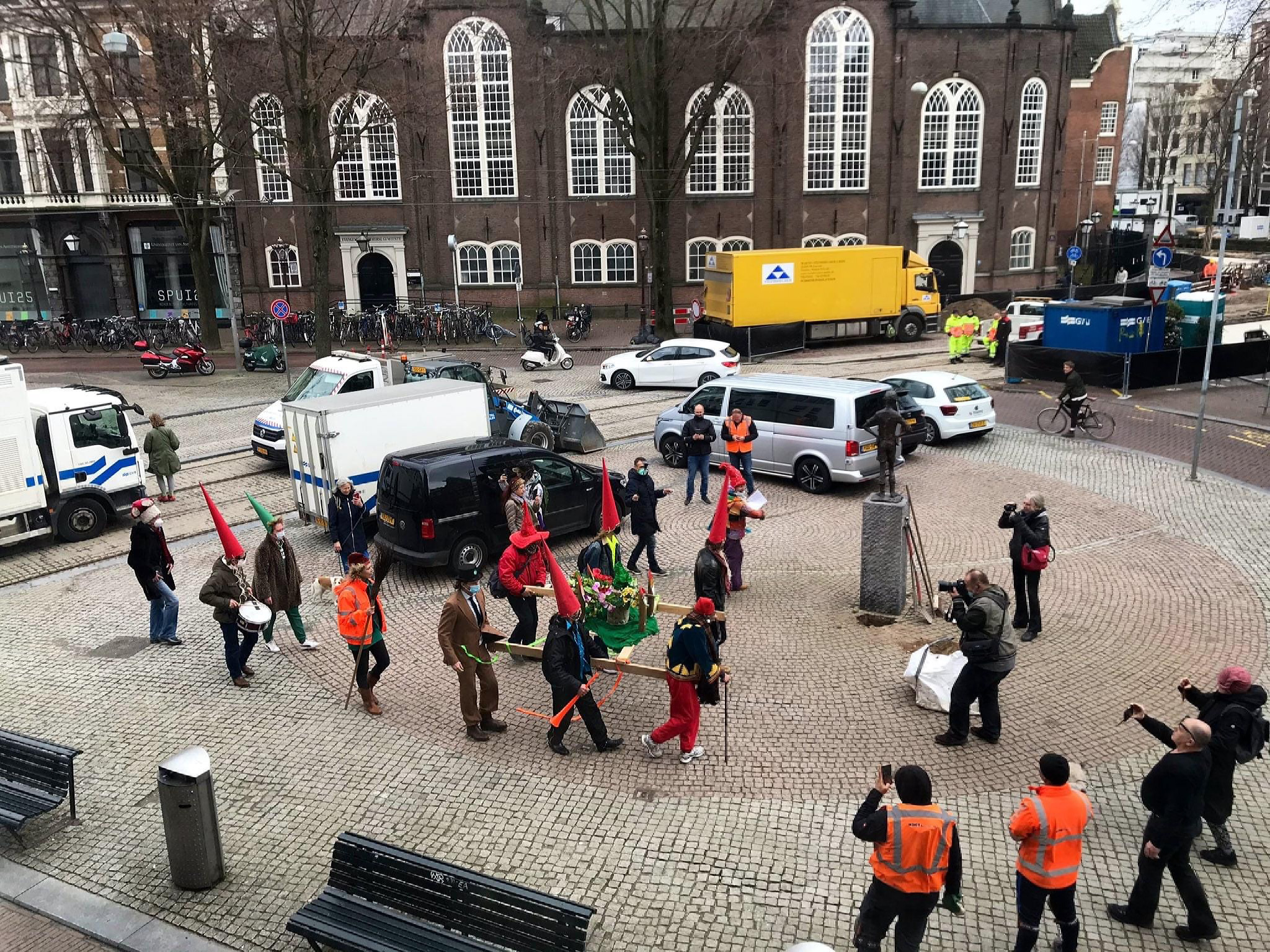 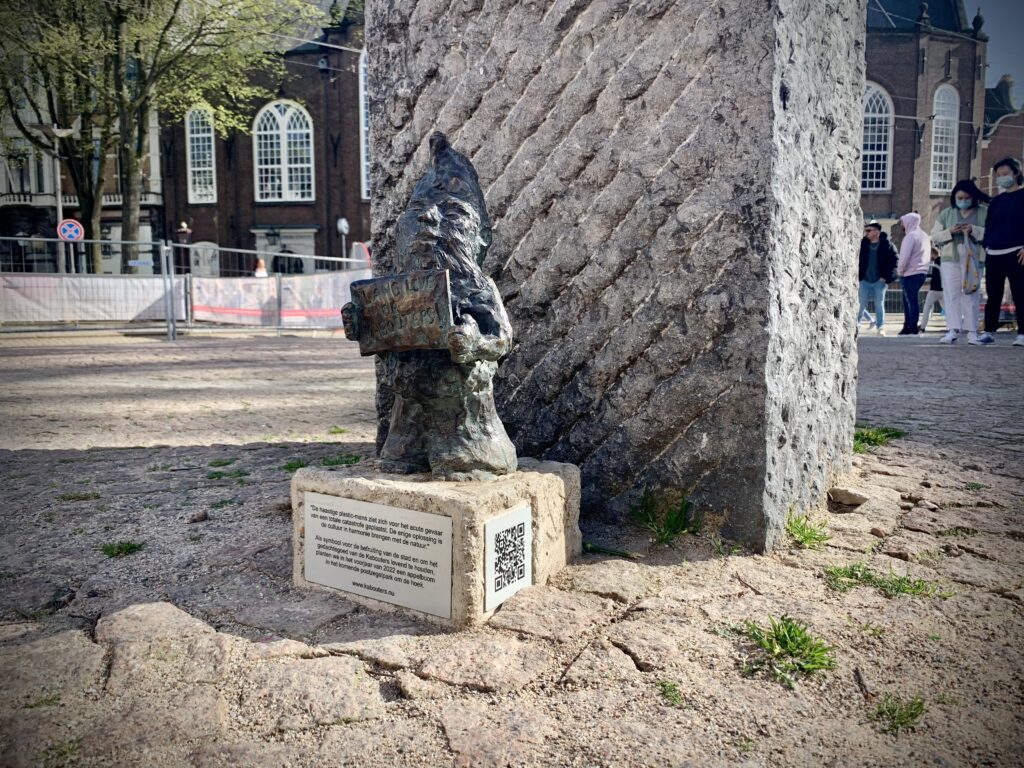 underneath the Spui’s cobblestones, the beach…

The Kabouters grew out of the damp grey, sea shell-encrusted Amsterdam clay. The movement took shape under the sign of the Gnot[1] – an image of an apple with a dot and stem – later planted in the city center in the shadow of the Lieverdje– the famous statue of a street urchin celebrating adolescent mischief. The Spui remains an active magic center for playful resistance to business-as-usual. It’s a nursery for tending old commitments, channeling new ideas and energies. Along with Rudolph Steiner, Pyotr Kropotkin (1842-1921), the bearded anarchist activist-thinker who supported small scale agriculture and argued for cooperation over competition as the dominant vector within human evolution is the link back to the past – he is the proto-Kabouter.[2

Further reading: artist statement Ruchama Noorda who made the sculpture of the gnome: http://www.ruchama.com/kabouter-magies/ 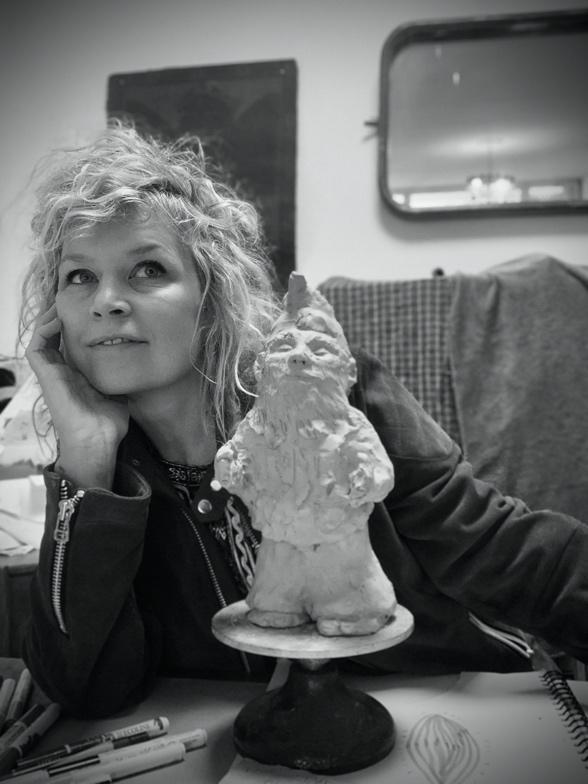